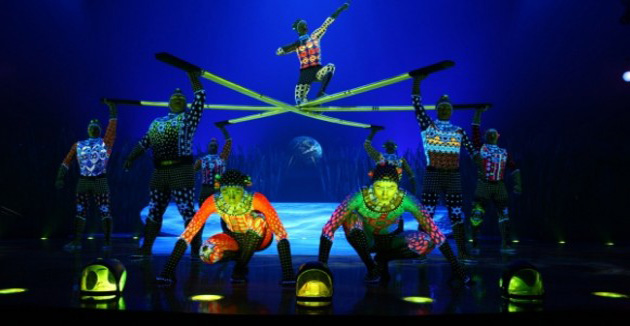 I once queued up in a wet field with hundreds of people, all eager to enter a circus tent – and who can resist the magnificent pull of a circus tent?  The extravaganza we were eager to see was staged by Cirque du Soleil – or Circus of the Sun.  So they’re French right?  Well it’s confusing, because no, wrong.  They’re actually Canadian, but you know, a lot of them speak French.  Inside things got darker.  Apparently this was ‘nouveau cirque’ – a new, more conceptual kind of circus. There was edgy music, subdued lighting, death defying action on a high trapeze

When the little boy in front asked his mum –‘but where are the elephants?’ I knew he was in for a surprise, and maybe not one he would like.  No, there are no elephants, so you won’t step in anything nasty, unless there’s been an unfortunate accident and the magnificent man on the flying trapeze just landed with a splat in the middle of the ring.

Circus of the Sun

Oh, except nowadays it’s all got bigger, and there isn’t a ring.  You’re not here to see lions, a ringmaster in a top hat or a pretty dancer pirouetting on a prancing pony.  After all, when you take a trip to the circus with Chauffeur London and sit in the luxurious embrace of a  Mercedes S class chauffeur driven car you may not want to get out and sit in a tent. 90 million people worldwide have watched Cirque du Soleil since the company of street dancers and circus performers started up in 1984. You’re now more likely to see Circus of the Sun in Las Vegas, or a massive whiz bang venue near you, than in the middle of a muddy field

Cirque du Soleil appears in their show stopping set ‘Totem’ at the Royal Albert Hall until mid February 2012.  A massive space, they fill it up, no problem, though the underlying theme – the journey of mankind from its ‘original amphibian state to its ultimate desire to fly’ is possibly too deep for me.  The world music is inspiring though – Spanish flamenco, Native American, Indian – and the fabulous acrobatics and sensational dancing makes for a singular event. But don’t expect clowns, with a bucket of soapy water – if the thrill of maybe getting soaked is what puts a smile on your face, then stay outside in the rain.