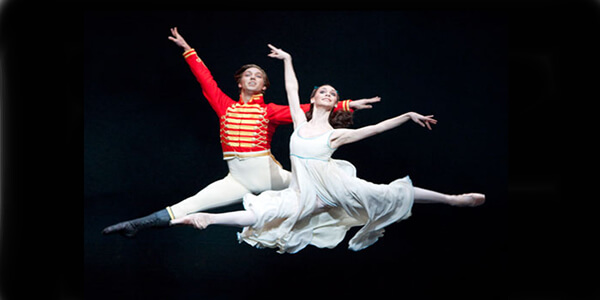 In a breathtaking theatrical panorama woven from music, words and dance, The Nutcracker Suite tells the story of young Clara, as she embarks on a magical journey, peopled by fairies, talking toys, magicians and dancing mice.  Welcomed by our expert London theatre chauffeur you too can leave your domestic, everyday life and take your first step into an enchanted land. In the sumptuous lap of luxury, your chauffeur can whisk you away to a fabulous evening of classical music and exquisite ballet, set in the heart of London at the Royal Opera House, home of the Royal Ballet.

Famously composed by Tchaikovsky, The Nutcracker Suite is based on The Nutcracker and the Mouse King, written by E. T. A. Hoffmann, and set on Christmas Eve. This world class ballet produced by Peter Wright opened in mid-December, 2011, and until mid-January, 2012 it conjures a fantastical world of bewitching orchestration, conducted by Barry Wordsworth and Dominic Grier. The spectacular sets create a wondrous backdrop to superlative dance, expertly choreographed by Lev Ivanov.  Many of us remember The Nutcracker from our childhood, and it famously formed part of Walt Disney’s ‘Fantasia’, starring Mickey Mouse.  From the rousing notes of The Russian Dance, the bitter-sweet melody of the Arabian Dance and the haunting Waltz of the Flowers, you can be caught up in the magic once again.

In the company of the magician Herr Drosselmeyer and his nephew Hans-Peter, now transformed into a Nutcracker doll, Clara meets the wicked Mouse King and the enchanting Sugar Plum Fairy.  From the lovely detail of a wealthy German home in the early 19th century, splendid with a Christmas tree and beautiful presents, to the exciting pitched battle of the mice and the toys, you too can journey to the Land of the Snow and the Kingdom of Sweets, in the opulent embrace of our luxurious chauffeur driven cars.  Watch with wonder, as Clara becomes a woman and the Nutcracker doll metamorphoses into her own real, live prince.  And what more relaxing way could we wrap up this magical theatre extravaganza than to safely escort you home through the starlit streets of London, courtesy of Mercedes Chauffeur Hire?